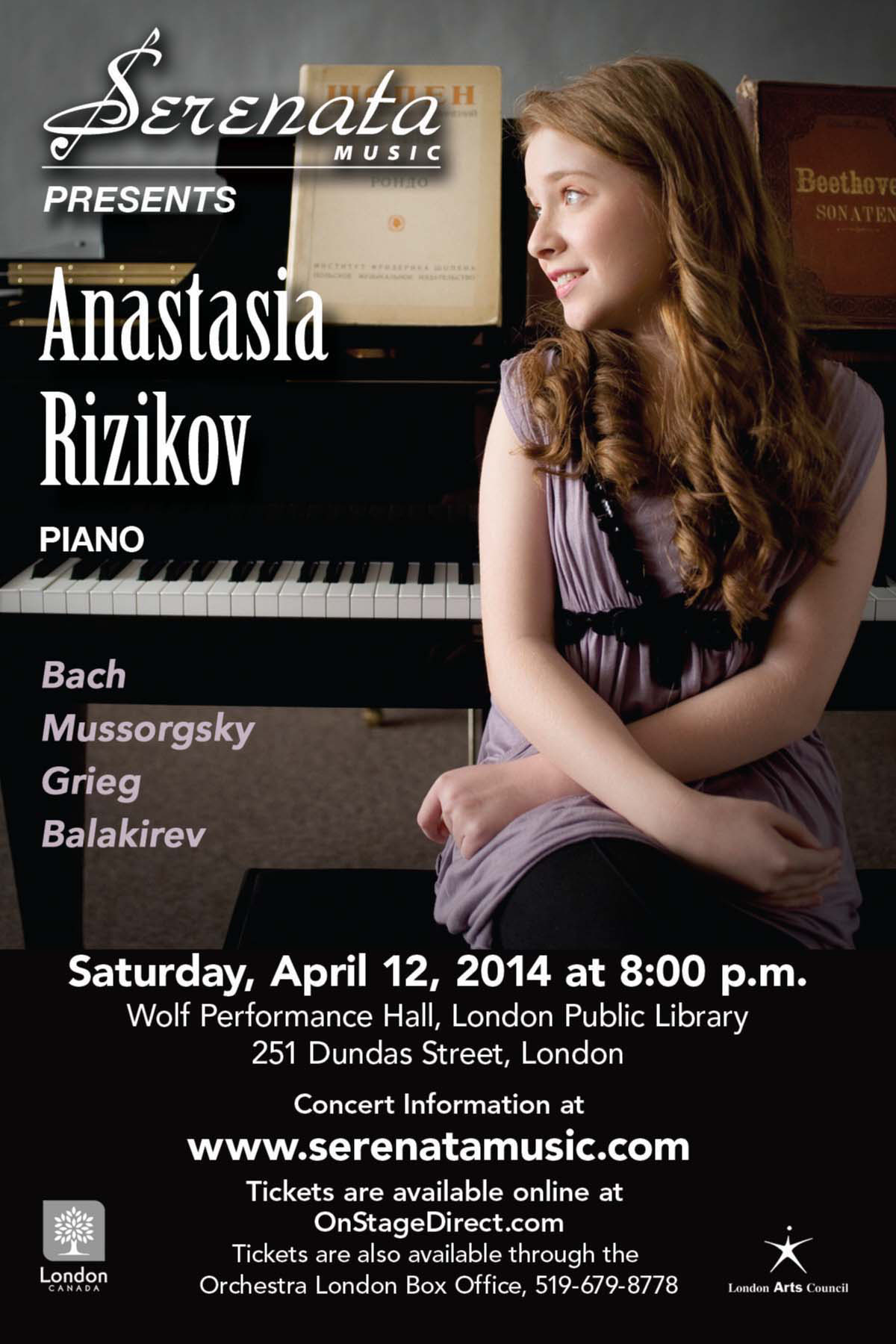 Anastasia Rizikov
Pianist
Serenata Music was pleased to welcome back the young (now 15 years old) Canadian pianist Anastasia
Rizikov for her second appearance on our stage. Since her last performance she has won two major piano competitions in Italy and New York, and has been concertizing regularly in North America. She performed in New York at the Aaron Silberman series at Baruch College, City University of New York in November 2012. In September of 2013 she presented 11 concerts in the Debut Atlantic series in Atlantic Canada. She recently delighted London audiences with her January, 2014 debut with Orchestra London. She returned to Halifax in February to perform with the Atlantic Symphony. Her talent has been recognized by the Glenn Gould foundation which donated a Yamaha grand piano to encourage excellence in her artistic development.
When she last appeared here as a precocious thirteen year old she was already showing signs of being âone to watchâ. She was performing numerous solo concerts in major US cities such as Detroit, Chicago, Binghamton, New York City, New Jersey City, and Washington, and returned to these cities every fall for solo performances. Anastasia gave two performances of Kabalevskyâs Piano Concerto No. 3 with the International Symphony Orchestra conducted by Robert Debbaut in Sarnia, Ontario, and in Port Huron, Michigan. In 2009, she performed as guest soloist with the Northwest Chicago Symphony Orchestra conducted by Michael Holian and in 2010 with the Plymouth Symphony Orchestra in Michigan conducted by Nan Washburn, in performances of Chopinâs Piano Concerto No. 2 in F Minor. She also performed the string quartet arrangement of the Chopin in Binghamton, NY, under the leadership of Steinway artist John Covelli. Closer to her Toronto home, Anastasia has performed Beethovenâs Piano Concerto No. 1 with the Toronto Sinfonietta, conducted by Matthew Jaskiewicz; and made concert appearances in London and Toronto.

Anastasia is currently on the international competition circuit, winning many awards in the process. In May 2011, she captured first prize in the Rotary International Piano Competition in Palma de Mallorca, Spain â choosing to enter the more challenging Category A (up to 28 year old) â the youngest person in the competitionâs 18 years to do so â and winning over players twice her age! She will return to Spain for a series of solo recitals, as well as a concerto performance with Balearic Symphony Orchestra.

In 2010, Anastasia won first place in the Thousand Islands International Piano Competition for Young People (Cape Vincent, USA). She also won first place at American ProtÃ©gÃ© 2010 International Piano and Strings Competition and performed in New York Cityâs Carnegie Hall. She had already performed at Carnegie Hall when, in 2009, Anastasia became the first place winner at the Bradshaw & Buono International Piano Competition. In 2008, representing Canada, Anastasia performed with great success in the Kremlin at the international festival âMoscow Meets Friendsâ, organized by Vladimir Spivakovâs International Charity Foundation; she was awarded the Festivalâs medal and diploma. Also in 2008, Anastasia had the honour of performing at the fourth âYoung Stars of the Young Centuryâ Gala Concert organized by Vladimir Spivakovâs Charity Foundation, which took place in the Toronto Centre for The Arts. In 2006, Anastasia became the first place winner at The Vladimir Horowitz International Young Pianists Competition in Kiev, Ukraine, again, representing Canada. She was also given a special award for Best Artistic Performance and, at age seven, made her orchestral debut, performing Polunin's Concertino in A minor with the National Philharmonic Symphony Orchestra of Ukraine, conducted by Mykola Diadiura.

Anastasia has given interviews and performed at Torontoâs Classical 96.3 FM radio station, CBC Television news, Russian MIX TV, and the Ukrainian TV programs Svitohliad and Kontakt. An excerpt of one of her videos was even briefly shown on The Oprah Show during a feature on gifted children. Anastasia studies with award-winning Master of Music Maia Spis, teacher at the Nadia Music Academy in Toronto. She has played in master classes for Anatoly Ryabov (Professor at the Conservatory of Moscow), Oxana Yablonskaya (Professor at the Juilliard School of Music), and has worked with Olga Kern (winner of the 2001 Van Cliburn International Piano Competition). Anastasia began her studies at age five, and since then showed unparalleled dedication to both practice and performance.

Fluent in Russian, Ukrainian, and English, Anastasia does spend rare moments away from the piano. She loves to read because âit is like entering a whole different world and experiencing the role of my favorite character â so my imagination goes wild!â She also loves animals, shopping, and she treasures her friendships, which are difficult to foster, given her practice and travel schedule. âI always look forward to seeing my friends, although I rarely see them. When I do, I feel like one of them, not like an adult â the way I feel most of times.â Her dreams are to become a renowned and accomplished pianist with beautiful dresses on stage, and to âtouch the hearts of the audience.â