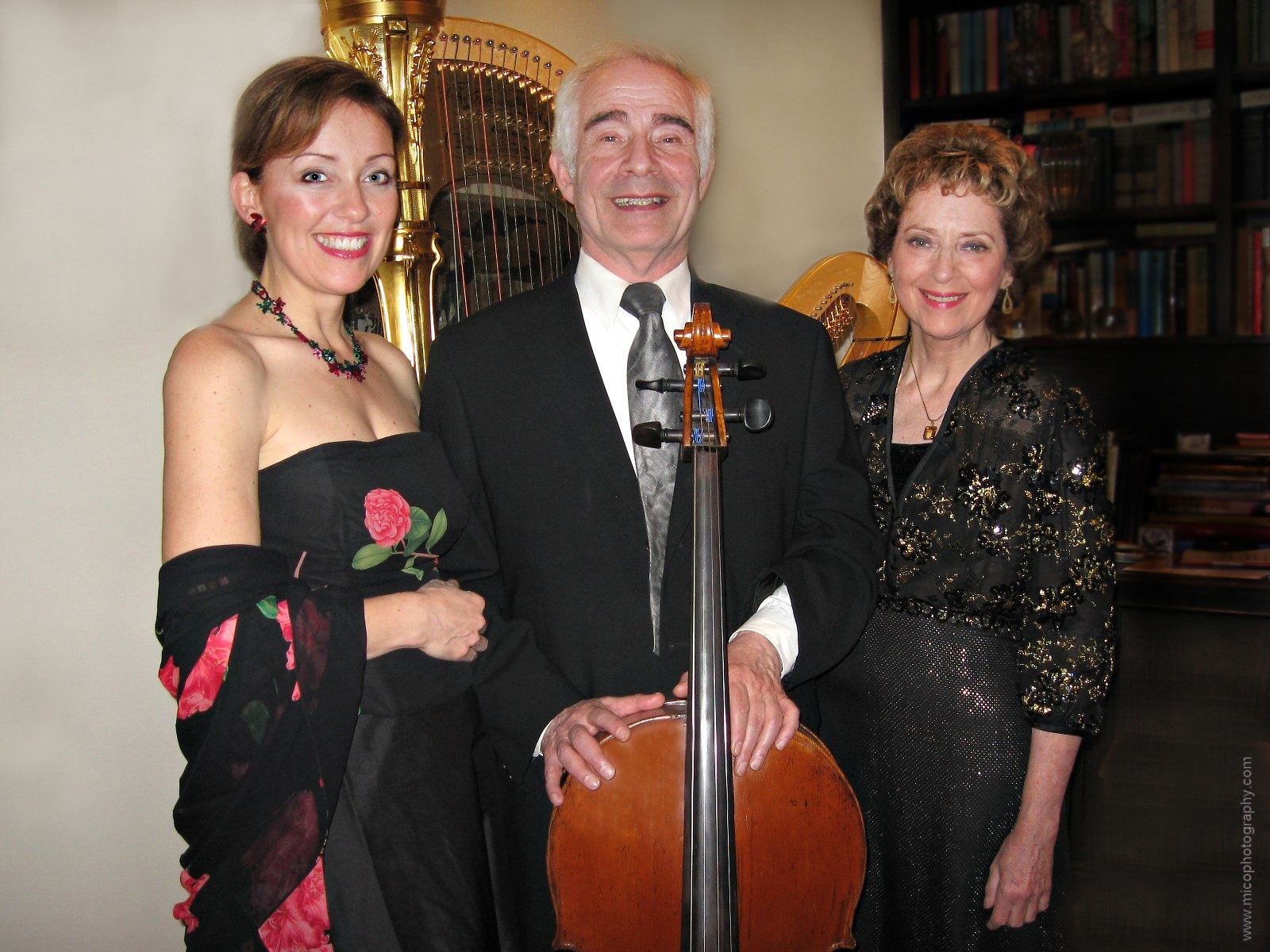 Trio Désirée
Cello, Harp, Soprano
Trio DÃ©sirÃ© is composed of three dynamic musicians who perform an eclectic repetoire.
DÃ©sirÃ©e Till; Soprano, Erica Goodman; Harpist, and Coenraad Bloemendal; Cellist.
Born in Zurich, the Dutch soprano DÃ©sirÃ©e Till grew up in Switzerland where she also studied singing and graduated (B.MUS) at the Hochschule fÃ¼r Musik und Theater in Bern, Switzerland. This led to further studies at the Zurich Opera and to her operatic debut as Olga in LÃ©harâs Merry Widow. In Switzerland she performed many roles.
Most recently she completed her masters in Music Interpretation at the UniversitÃ© de MontrÃ©al, Ãcole de musique Vincent dâIndy. Big influences for her work on stage have been in theatres in Switzerland, Vienna, and Germany)
In 2008 she sung Adele (Fledermaus) in a production from the atelier dâopÃ©ra at the UniversitÃ© de MontrÃ©al with Jean-FranÃ§ois Rivest. Also in 2008, DÃ©sirÃ©e Till performed for the first time at the Toronto Summer Music Academy and Festivalâs Ariadne auf Naxos the role of Zerbinetta.

Erica Goodman; Harpist
A native of Toronto, Erica Goodman is acclaimed as one of the worldâs outstanding solo harpists. She received her training at the Royal Conservatory of Music (Toronto), the National Music Camp (Interlochen, Michigan) and the Curtis Institute of Music (Philadelphia). Already a concert performer in her teens, Erica played under the baton of Igor Stravinsky when he recorded in Toronto.
While studying at Curtis, she won a concerto competition and was rewarded with a solo appearance with the famed Philadelphia Orchestra. Upon finishing her studies, Mario Bernardi chose her to be a member of the newly formed National Arts Centre Orchestra. Erica is currently a member of Torontoâs Esprit Orchestra which specializes in contemporary music and plays with Barbara Croallâs âErgo Ensembleâ which promotes Canadian contemporary music at home and abroad.
Ericaâs love of chamber music is highlighted by her long association with colleagues and groups such as flutist Robert Aitken, oboist Lawrence Cherney and Trio Lyra and with Swedish horn virtuoso SÃ¶ren Hermansson.
Erica is a charter member of Torontoâs New Music Concerts Ensemble. She is a âregularâ on the summer festival circuit, Erica has appeared at The Scotia Festival, the Festival of the Sound, the Elora Festival, the Ottawa Chamber Music Festival and the Tanglewood Music Festival.
Following a concert at the North American New Music Festival in Buffalo NY, music critic Richard Chon extolled, ââ¦a stunningly virtuosic harpist whose very presence on the scene is an incentive for the creation of new works.â Canadian composers thus inspired include Alexina Louie, Oskar Morawetz, Milton Barnes, Marjan Mozetich, Harry Freedman, Lothar Klein, Rodney Sharman and Chris Paul Harman.
In addition to her international concert performances, Erica Goodman has made many recordings on the CBC, Marquis, BIS, Opening Day, Avalon, Centrediscs and Naxos labels. In 1995, she won a Juno for her solo BIS CD âErica Goodman Plays Canadian Harp Music". In 1980, Erica won the Grand Prix du Disque for her BIS recording âFlute and Harpâ with Robert Aitken. NOW Magazine selected her as Best Canadian Classical Musician in its 1996 âBest of Torontoâ readersâ poll.

Coenraad Bloemendal; Cellist
Coenraad Bloemendal was born in Amsterdam and did his training at the Amsterdam Conservatory with Carel van Leeuwen Boomkamp. He did his postgraduate work with the legendary cellist Janos Starker at Indiana University in the US. After moving to Canada in 1971, Coenraad Bloemendal joined the Camerata Canada chamber ensemble and quickly established himself as one of the countryâs most outstanding cellists.
As a soloist he has played he has played the major concert works. With pianist Valerie Tryon, his duo partner of 25 years, Bloemendal has performed most of the repertoire for cello and piano both in concert and for CBC radio. He has played with Glenn Gould on CBC Televisionâs "Music in our Time" which led to participation in other recording projects with the great pianist. Coenraad Bloemendal has played with many chamber groups including Camerata Canada the Canadian Chamber Ensemble, The Toronto Chamber Players and The Rembrandt Trio. He has played at numerous festivals such as the Stratford Festival, the Guelph Spring Festival, The Collingwood Festival the Orford and the Shaw Festivals. He also toured North and South America, Europe and the United Kingdom. Coenraad Bloemendal has recorded extensively on different labels such as Sony, Dorian, Crystal, CBC and Marquis Classics. His latest album Reflections with Erica Goodman can be heard frequently on Classical 96.3.