SERENATA MUSIC RETURNS WITH THE LONDON SYMPHONIA THIS SATURDAY

For the first time since January of 2020 Serenata Music is sponsoring a concert with the London Symphonia featuring Canadian pianist Stewart Goodyear as noted in the right hand panel. We are pleased to begin this relationship with such an outstanding artist.
As the pandemic eases we intend to plan on future concerts.
We are especially excited to anticipate the remodelling of the Metropolitan United Church to create a new modern concert venue. We congratulate the Symphonia and the church for the creation of this facility.
We will update our plans on this website.

SEE THE SPECIAL NEWS SECTION FOR CURRENT CONCERT ANNOUNCEMENTS.
MANY OF THESE CONCERTS WILL ALSO BE ON LINE. 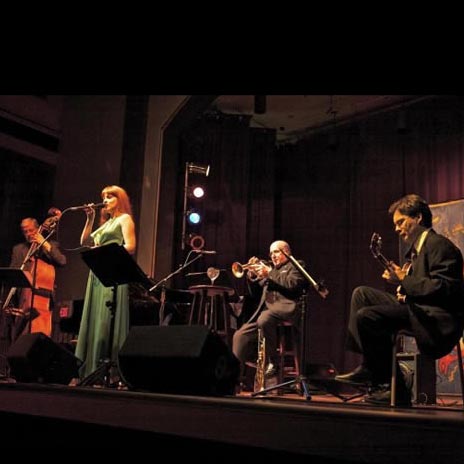 Don thompson, Bass , Piano, Guido Basso, Flugelhorn, Reg Schwager, Guitar, Diana Panton, Vocals
We welcome back Don Thompson who appeared last season with Trio Desiree. This concert he teams up with Guido Basso, Flugelhorn, Reg Schweger, Guitar, and Diana Panton, Vocals, in an afternoon of pure jazz. As outlined on our Biography page, Don is one of Canada's leading jazz musicians and composers having won manifold honours including the Order of Canada in 2009. As a bassist, pianist and vibrophonist since the 1960s he has played worldwide with a who's who of jazz. As a mentor of rising jazz musicians he has recently teamed up with the above group which has been featuring Diana Panton on stage and on recordings.

GUIDO BASSO (Flugelhorn) (born 27 September 1937 in Montreal) is a jazz musician from Montreal. He started playing the trumpet when he was nine. Settling in Toronto in 1960, he became a studio trumpeter. He also occasionally played harmonica in-studio. In 1963, he became a music director for CBLT, a post he held until 1967. He was made a member of the Order of Canada in 1994.[1]
He is a trumpeter, flugelhornist, harmonica-player, arranger, composer, conductor. He studied at the Conservatoire de musique du Quebec. His career started in his teens, when singer Vic Damone included him in an international tour.
In 1958 he joined singer Pearl Bailey and her bandleader husband, drummer Louis Bellson, touring North America with them for three years before moving to Toronto to join the studio and television scene there. Beginning in 1975, he frequently organized and led big band concerts at Torontoâs Canadian National Exhibition featuring jazz luminaries including Dizzy Gillespie, Quincy Jones, Woody Herman, Benny Goodman, Duke Ellington, and Count Basie. He can be heard on hundreds of record albums, playing and recording with stars from Buddy Rich and Oliver Jones to Carol Welsman and Diana Krall. He is currently featured on vocalist Diana Pantonâs release âPinkâ.
Guido Basso was a charter member of Rob McConnellâs group, The Boss Brass, and the Rob McConnell Tentet, playing with The Boss Brass as a featured soloist throughout their lifetime, and appearing on 30 Boss Brass recordings. He was part of the âSound of Torontoâ series of reunion concerts of the Boss Brass in 2008.

REG SCHWAGER (guitar) was born May 7, 1962 in Leiden, The Netherlands. He is today, and has been for many years, one of Canadaâs leading jazz guitarists. When he was three years old, his family movedfrom Holland to New Zealand where he studied Suzuki violin. When he was six, his family moved again, this time to Sudbury, Ontario, Canada. There he took music lessons in recorder, flute and piano before settling on the guitar as his main instrument. By the age of 15, he was playing jazz gigs in big band and small group settings and in duet with his sister Jeannette.
It was at two jazz workshops conducted by Phil Nimmons -- at the University of Toronto (1978) and the Banff Centre (1979) -- that Reg met some of the musicians he would begin working with soon after he moved to Toronto in 1979. They included fellow students Renee Rosnes and Ralph Bowen and faculty members including Nimmons, Dave McMurdo, Herbie Spanier and Pat LaBarbera. Since then he has worked steadily on the Toronto jazz scene and in other musical areas including new music (New Music Concerts, Hemispheres and Sound Pressure, among others) and improvised music (with musicians such as Misha Mengelberg and Han Bennink).
Reg has toured extensively across Canada and worldwide with George Shearing, Diana Krall, Peter Appleyard, Rob McConnell and many others. He appears on over 80 commercially released recordings with such artists as Junior Mance, Gary Burton, George Shearing and Mel Torme;. CDs released under his own name include Resonance, Border Town and Live at Mezzetta. He has written hundreds of jazz compositions, some with lyrics by Jeannette Lambert. His arrangements for big band have been recorded by the Dave McMurdo Jazz Orchestra, and his arrangements for string orchestra and jazz ensemble appear on Mike Murley's CD The Melody Lingers On (CBC> Records).
For the past seven years he has maintained a popular weblog devoted to news about Brazilian music at bmth.blogspot.com. He has attended workshops and classes with such Brazilian masters as Guinga, Dori Caymmi, Marcos Silva, Jovino Santos Neto, Paulo Sergio Santos and Hamilton de Holanda, mainly at the California-Brazil Camp.He is the winner of the National Jazz Awards 'Guitarist of the Year' for several years.

DIANA PANTON (Vocals) is being heralded as one of the brightest lights on the jazz scene today. Her aesthetic sense has attracted the attention of some of the jazz worldâs most respected masters. When legendary Canadian multi-instrumentalist Don Thompson first heard Panton sing at age 19, he recommended she audition for the reputed jazz workshop at the Banff Center for the Arts (Canada). There, she studied under Norma Winstone (and in subsequent visits, Sheila Jordan and Jay Clayton).
While at Banff, she was invited to perform with Thompson at the famed âBlue Roomâ. âShe really knocked me out that night, â Thompson said. âShe was so young but she had a lot of depth and real feeling. It surprised me right away.â Following that performance, Thompson told Panton to contact him when she was ready to record an album. She didâsome 10 years later!
Before recording her first album, Panton first completed an honours masters degree in French literature and fulfilled a teaching engagement at the University of Paris (France), followed by a position as a sessional lecturer at McMaster University (Canada). She then completed a teaching degree. During this time, she also produced and performed a number of sold-out concerts with emerging jazz prodigy, pianist David Braid.
When the time finally arrived to go into the studio, national award-winning guitarist Reg Schwager was invited to join Don Thompson for some stellar accompaniment behind Pantonâs pure vocals. The late great Montreal jazz critic Len Dobbin called ...yesterday perhaps (2005) one of the finest debut CDs he had heard in years. Diana was featured on the cover VIEW Magazine and NOW Magazine. The album made the NOW Magazine's TOP 10 Discs of the Year. This album was released in Japan in 2011 and was awarded the Silver Disc Award for Best Vocal Jazz Release of the year by the country's prestigious Jazz Critique Magazine.
Success continued with Hamilton Music Awards, Juno and National Jazz Awards nominations for her sophomore release, if the moon turns green... (2007) - a thematic album about the moon and the stars. Diana was one of four jazz vocalists selected worldwide to showcase at the prestigious Jazz a Juan Revelations (Juan-les-Pins, France) where she was voted Premiere Dauphine by the Juan public. In 2011, the album made the Top 2 on the annual jazz sales chart for Eslite, Taiwan's most important chain store.
Diana's third album, pink (2009), is a narrative concept album about the twists and turns of new love. It features superb accompaniment once again from Reg Schwager and Don Thompson along with a highlight appearance from Canada's premier horn player Guido Basso. The album was awarded a Silver Disc Award for Best Vocal Recording of 2010 by Japan's Jazz Critique Magazine, as well as a nomination for Favourite Jazz Artist at the 2010 Canadian Independent Music Awards. The disc made the Top 3 annual jazz chart in Taiwan for best online CD sales in 2011.
Diana's fourth album, to Brazil with love (2011), is a tribute to the samba and bossa nova traditions of Brazil. The album features the most adventurous instrumentation to date. Maninho Costa and Silas Silva add Brazilian rhythms on drums and percussion, while Kiki Misumi on cello and Bill McBirnie on flute add colour and texture. Don and Reg are still the mainstay of the trio and provide delightful accompaniment and soloing throughout. The album appeared on a number of Best of 2011 lists, including those of Japan's Jazz Critique Magazine, Tim Perlich, JAZZ.FM's hosts Jaymz Bee and John Devenish. The album also ranked #1 for eight weeks on the jazz sales chart in Greater China and Singapore. All three of Diana's most recent albums appeared simultaneously on the Top Ten jazz sales chart for 12 weeks in Taiwan and Hong Kong. The album was nominated for a JUNO, a Canadian Independent Music Award and an American Independent Music Award. It won the 2012 Juno Awards for Vocal Jazz Album of the Year.
Diana's latest release, Christmas Kiss, is a delightful mixture of carefully selected chestnuts, obscure gems and new originals. This album is sure to become a seasonal favourite! "The quality and the mood of the music on this CD is very different from your typical seasonal disc; you don't have to play it only in December. Personally, I could listen to this recording all year long ..." (Guido Basso).