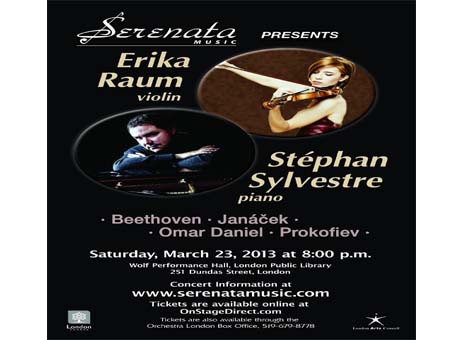 ERIKA RAUM, violin, STEPHAN SYLVESTRE, piano
Beethoven, Janacek, Daniel, Prokofiev
ERIKA RAUM
Known for her "engaging sensitivity and a gorgeously full tone," [THE STRAD], violinist Erika Raum continues developing a following here in her native country and internationally. Playing professionally since the age of twelve, Ms. Raum quickly rose through the ranks by taking first place at the 1992 Joseph Szigeti International Violin Competition in Budapest as well as the award for best interpretation of a Mozart concerto. She has returned on many occasions to perform in Hungary, Portugal, Sweden, Austria, Germany, England, Italy and France. She has appeared as guest artist with such orchestras as the Budapest Radio Orchestra, the Szombathely Symphony Orchestra, the Austro-Hungarian Orchestra, and the Franz Liszt Chamber Orchestra.

A distinguished musician abroad, Erika also performs frequently throughout her homeland with orchestral appearances in cities such as Toronto, Calgary, Vancouver, Ottawa, Victoria, Halifax, Laval and Edmonton. Both a recitalist and chamber musician, some of her recent international highlights include the Festival Pablo Casals in Prades France, Beethoven Festival in Warsaw, the BargeMusic Festival in New York, Seattle Chamber Music Festival and past invitation include the Budapest Spring Festival, Szombathely Festival in Hungary, Carnegie Hall as well as the Caramoor and Prussia Cove festivals. Her performances are often heard on an array of radio networks like CBC across Canada and the NPR in the USA. In the 2010.11 season, Erika will perform in concerto with orchestras and will be featured in recital at the 2011 NAC Prairie Scenes.

Erika is a member of the ARC Ensemble (Artists of the Royal Conservatory), a chamber group specializing in the rediscovery of great 20th century composers and their music, with an emphasis on those whose lives were interrupted or even lost during the Holocaust. So far, they have released two CDs on the RCA Red Seal label, both of which were nominated for Grammy Awards. The Strad Magazine even gave Erika special mention for her performance noting that Erika had them âhanging on to her every noteâ. Further recordings include a partnership with internationally renowned pianist Anton Kuerti which produced a critically acclaimed world premiere recording of Carl Czerny's piano and violin works on the CBC Musica Viva label. Her most recent release for the Arktos label consists of the Brahms Horn Trio and another recording premiere: Pantheon by the esteemed composer (and mother!) Elizabeth Raum. She is also currently completing a disc of the complete violin and piano works of Krystof Penderecki with pianist Lydia Wong.

Erika is a graduate of the University of Toronto where she studied with the late Professor Lorand Fenyves and was awarded the prestigious Eaton Scholarship upon her graduation. She is also a recipient of The Canada Council for the Arts - Career Development Grant. Ms. Raum is currently on the faculties of The Glenn Gould School at The Royal Conservatory of Music, Toronto and the University of Toronto. She lives in Toronto with her husband, distinguished Canadian composer, Omar Daniel, their three-year-old daughter Roslein, and bouncing triplet babies Eero, Oskar, and Roxanne.

STEPHAN SYLVESTRE
StÃ©phan Sylvestre ranks among the most sought-after and brilliant Canadian pianists of the new generation and enjoys an active performing career as a recitalist, orchestra soloist, chamber musician and recording artist. Critics on both sides of the Atlantic have bestowed lavish praise on his performances: ââ¦his natural talent reminds one of the great Artur Rubinsteinâ¦â (La Presse, Montreal), ââ¦somewhat reminiscent of the young Kempffâ (La Scena Musicale, Canada), ââ¦ He is one of those musicians who plays a work, first, for its own sake, then for himself, and finally, for the audience, which is privileged to be witness to his search for the very heart of the work.â (Le Droit, Ottawa), ââ¦masterly brilliant virtuosity and monumentality,â (Flovo Cultury,Czech Republic), ââ¦such effortless simplicity is a joy.â (Edinburghguide.com). The New Winnipeg Magazine also described him in the following terms: â Some pianists are able to coax their instrument into doing just about anything. With seemingly little effort and a few quiet sorrowful notes they stir up a passionate response. StÃ©phan Sylvestre is such an artistâ.

His numerous concert tours and performances have taken place in major concert halls, universities and concert organizations throughout Canada, United States, Brazil, the Middle East, France, Italy, Scotland, Ireland, England, Czech Republic, Russia and the Netherlands. Notable venues include the Concertgebouw (Amsterdam), St. Martin-in-the-Fields (London), the St-Petersburg Conservatory (Russia), Place des Arts (Montreal), the National Arts Centre (Ottawa), the Four Seasons Centre (Toronto) and Massey Hall (Toronto). He has appeared with several Canadian orchestras and he has performed in the major international festivals in Canada, including Ottawa, Parry Sound, LanaudiÃ¨re, Domaine Forget and Orford. Mr. Sylvestre was also recently Pianist-In-Residence at Barrieâs Colour of Music Festival in Ontario. StÃ©phan Sylvestre is heard regularly on the French and English networks of the Canadian Broadcasting Corporation, Radio Suisse Romande and has performed live for the BBC in the United Kingdom.

He has collaborated with internationally renowned artists such as James Campbell, James Sommerville, Ransom Wilson, Martin Beaver, Rivka Golani, Susan Hoeppner, the Penderecki String Quartet, the New Zealand Quartet, Quartuor Arthur-Leblanc, Quatuor Alcan and members of the Israel Philharmonic Orchestra among many others. He was also a member of Trio Contrastes until 2002. His first two recordings on the Atma label were selected among Outstanding Records of the Year by Radio-Canadaâs weekly record review. His third recording, a live recital of works by Martinu, Schumann, Chopin and Ravel, and his fourth recording with James Campbell and James Sommerville released on the Marquis label were also praised by critics. His latest recording of Brahmsâs late solo piano works was recently released on the label Prod. XXI:21. A critique in WholeNote magazine recently said: Sylvestre masterful performance is a welcome presence in our sometimes harsh and too-technologically advanced worldâ. StÃ©phan Sylvestre is invited regularly to give master classes and conferences abroad and he has been a member of several national and international juries, including the Canadian Music Competition, the Montreal Symphony Orchestra Competition, the Glenn Gould School and the Montreal International Piano Competition. In addition to his active performing and recording schedule, Stephan Sylvestre is also Assistant Professor of Piano and head of keyboard studies at The University of Western Ontario. He is presently working on recording the works for violin and piano by Karol Szymanovski with violinist Jerzy Kaplanek, which has been supported by a residency at the Banff Centre for the Arts.