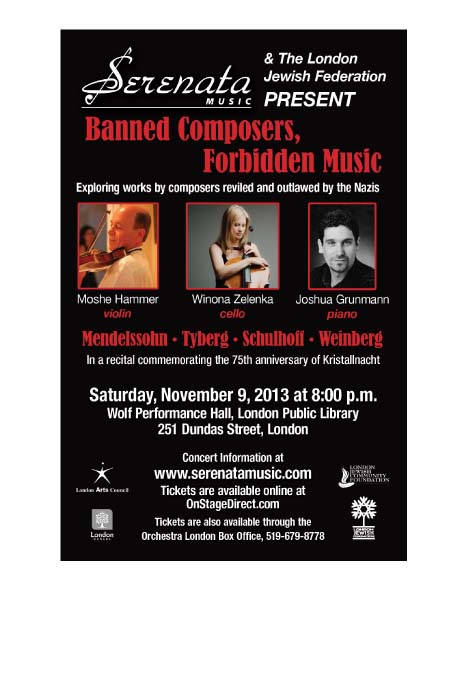 MOSHE HAMMER was born in Budapest March 29, 1946. His family moved to Israel where he studied with Ilona Feher, graduating in 1967 from the Rubin Academy of Music at the University of Tel-Aviv. He studied briefly in 1967 with Ivan Galamian at the Juilliard School, then 1968-9 with Jascha Heifetz in Los Angeles, where he participated in the chamber music concerts of Heifetz and the cellist Gregor Piatigorsky. He studied 1969-70 with Yehudi Menuhin in London, and won a medal in 1970 at the Thibaud Competition in Paris. He became a Canadian in 1975. He has been associate concertmaster of the Edmonton Symphony Orchestra, concertmaster of the Calgary Philharmonic a member of the Calgary-based piano trio One Third Ninth. He played in the Kitchener-Waterloo Symphony Orchestra (as concertmaster and the Canadian Chamber Ensemble (as principal violin). In September 1984 he performed in China on a trip sponsored by the Government of Canada. He was a founding member of the Amadeus Ensemble, and became a member of Da Camera Ensemble. Beginning in 1997 Mr. Hammer was a member of the Galaxy Trio. In addition to ensemble work, he has been a soloist with the Calgary Philharmonic, the National Arts Centre Orchestra, Kitchener-Waterloo Symphony Orchestra, Winnipeg Symphony Orchestra, and other orchestras in North America and Europe, and has been heard frequently on CBC radio broadcasts.â¨ Mr. Hammer taught 1980-2 at York University and has adjudicated at festivals and offered master classes at schools throughout Canada and Europe. In 2007 he founded the non-profit educational program The Hammer Band - From Violence to Violins. The program provides free violin lessons (including an instrument), weekly rehearsals, and performance opportunities to at-risk youth in Toronto's urban elementary schools. In its first year, the program accomodated 30 students in two schools, and by 2011 it had reached 300 students in 15 schools. The Hammer Band has been featured in concert with the Rotterdam Philharmonic at Roy Thomson Hall (February 2010) and has been profiled on TVOntario and CBC.

WINONA ZELENKA, born in Canada, is a graduate of the Toronto Royal Conservatory and of Indiana University, where she was a student of Vladimir Orloff, Janos Starker, and William Pleeth. She had her concerto debut at the age of 13 with the Calgary Philharmonic, and her solo debut at Carnegie Recital Hall at the age of 17. She began her professional career at the age of 22 as assistant principal cellist of the Royal Liverpool Philharmonic, and subsequently held third chair positions in the Halle Orchestra of Manchester and the National Ballet Orchestra in Toronto. She has also worked with the Radio Orchestra of Saarbrucken, the BBC Symphony, the BBC Philharmonic, the Canadian Opera Company, the Esprit Ensemble, and the Santa Fe Opera Orchestra. She has been a member of the Toronto Symphony Orchestra since 2001, currently as assistant principal cellist of the orchestra. Winona Zelenka is one of CanadaÊ¼s finest cellists, known as a soloist, chamber musician and leading orchestral musician. In June 2010 she released her first CD set of the Bach Suites for Solo Cello, which she played on the âStarker Guarneriusâ made in 1707, which has received international acclaim and in 2011 was nominated for a JUNO award in the category of solo/chamber music CD. With June 2012 came the release of her second CD, a collaboration with the celebrated pianist Connie Shih in French works for cello and piano. She has been a cello soloist on such notable film scores as Atom Egoyanâs âAdorationâ (2008), IstvÃ¡n SzabÃ³âs âBeing Juliaâ (2004), and the IMAX film âUnder The Seaâ (2009). Her films with Moving Head Productions include interviews for BOLD TV and a complete performance of the CassadÃ³ Suite for Solo Cello, viewed by thousands on YouTube. Ms. Zelenka, a proponent of new music, performed the world premiere of âInvocation IIââ for cello and orchestra (with Huronia Sinfonietta), a work written for her by Canadian composer Michael Pepa, as well as the world premiere in 2006 of Chris Paul Harmanâs âSonata for Solo Celloâ, also written for her as an accompaniment to Bachâs Sixth Suite.

JOSHUA GRUNMANN. Born in London, Ontario, Grundmann graduated with a B.Music and a B.A. in French from Western University and a M.A. in music from the UniversitÃ© de Montreal where he held a Queen Elizabeth Scholarship. Based in London, Ontario and Toronto, Mr. Grunmann has established himself as a coach, accompanist and chamber music artist. He has performed in recital with a long list of Canadaâs finest singers, including Nathalie Paulin, Mary Lou Fallis, Theodore Baerg, Gary Relyea, John Tessier and Anita Krause, Monica Whicher, and Russell Braun. He was the repetiteur for Orchestra London's presentation of Donizetti's L'Elisir d'amore in 2001 and a repetiteur at the Banff Centre in 2002 and 2003 for the Opera as Theatre Program and for the first Banff Centre production of the opera Filumena by John Estacio. He has also been a Faculty member at the Young Artist training program of Songfest, in California and in the state of Washington where he performed with violinist Maria Newman and soprano Juliana Gondek. He was on the faculty as the vocal coach/accompanist at Iowa State University's Music Department where he also served as music director for Opera Studio performance.
He has worked with living composers such as John Harbison, John Estacio and Dorothy Chang (for whom he premiered Songs of Wood and Water). His vocal accompanying repertoire ranges from early Elizabethan songs to contemporary songs based on fridge-magnet poetry. He is also an avid chamber musician and has collaborated with the Madawaska String Quartet in a performance of the Brahms F minor Piano Quintet. Other recent recitals have been with oboist Ian Franklin, with tenors Colin Ainsworth and Neal Banerjee as well as with Jonathan Sturm, concertmaster of the Des Moines Symphony. He has played live on the radio for KMZT in Los Angeles and National Public Radio in Iowa and has been heard on CBC's Saturday Afternoon at the Opera. In 2006-07, he initiated a series, Larksong Recitals, in London, Ontario. Mr. Grunmann has performed numerous times on the Serenata Music series, as well as in New York on the Aaron Silberman Recital series at Baruch College, with Theodore Baerg, Monica Whicher, and clarinetist Charles Neidich, and at the Arts and Letters Club of Toronto as soloist and with violinist Mary Elizabeth Brown.