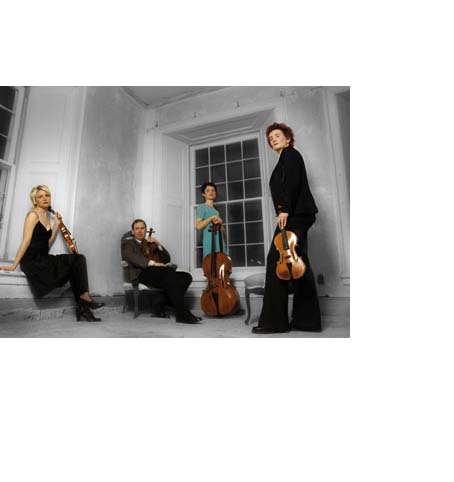 The Eybler Quartet came together in late 2004 to explore the works of the first century of the string quartet, with a healthy attention to lesser known composers such as their namesake, Joseph Leopold Edler von Eybler. The group plays on instruments appropriate to the period of the music it performs. In its brief but busy existence, the Toronto-based ensemble has consistently garnered praise for their âglowing and committedâ, âspiritedâ and âlively and energizingâ live performances. Violinists Julia Wedman and Aisslinn Nosky, and violist Patrick G. Jordan, are all members of Tafelmusik Baroque Orchestra; Julia and Aisslinn are also members of I FURIOSI Baroque Ensemble. âCellist Margaret Gay is much in demand as both a modern and period instrument player. The group brings a unique combination of talents and skills: years of collective experience as chamber musicians, technical prowess, experience in period instrument performance and an unquenchable passion for the repertoire. The groupâs premiere recording of Eyblerâs Opus 1 is also the world premiere recording of these pieces.

Born in Nanaimo, British Columbia, Aisslinn Nosky is known as a versatile musician who brings passion and fervour to every project she pursues. Since her solo debut with the CBC Vancouver Orchestra at the age of eight, she has performed in solo and chamber music recitals across North America, Europe and Asia.
Aisslinn has been a member of Tafelmusik Baroque Orchestra since 2005. As Canadaâs period instrument orchestra, Tafelmusik is greatly in demand internationally. Before joining Tafelmusik, Aisslinn was Assistant Principal Second Violin of the Canadian Opera Company Orchestra (from 2003-2005) and appeared as Guest Concertmaster with Symphony Nova Scotia on several occasions.
As a member of I FURIOSI Baroque Ensemble, Aisslinn has helped to bring an enthusiastic new audience to baroque music. For almost a decade, I FURIOSI has presented its own flamboyant and inventive concert series in Toronto. In 2007 the ensemble became the first classical music group to headline Toronto's Pride celebrations. The rest of 2007 found âThe Furious Onesâ appearing at the Henley Festival and the Tudeley Festival in the United Kingdom, and Tage Fur Alte Musik in Regensburg, Germany. In 2008 they will appear at the Galway Early Music Festival, the Ottawa Chamber Music Festival and The LamÃ¨que International Baroque Festival. I FURIOSI released its first self-produced CD âDefiled Is My (Middle) Nameâ to great critical acclaim in 2006. The groupâs next disc is set to be released by Sono Luminus in the fall of 2008.
Aisslinn's chamber groups are numerous and diverse. As a member of the Kirby String Quartet, Aisslinn plays a wide range of eclectic repertoire. The Kirby Quartet can be seen playing recitals across Canada as well as serving as faculty at the Advanced Chamber Music Workshop in Langley, B.C. She can also be spotted playing after hours with such bands as The Hidden Cameras, Hunter Valentine, and Rock Plaza Central.
Aisslinn completed her studies with Heilwig von Koenigsloew at the Nanaimo Conservatory and with Lorand Fenyves at the Royal Conservatory Of Music in Toronto.

Violinist Julia Wedman brings an "infectious vitality" to music (Victoria Times Colonist) and has been described as "extraordinarily intuitive" (Globe and Mail). Studies at the University of Western Ontario, the University of Toronto and Indiana University at Bloomington focused her search for musical understanding, inspiring a passion for historically informed, period performance. One critic described her as a musician who "likes to play all music as if were written yesterday".
Julia is one of the newest members of internationally renowned Tafelmusik Baroque Orchestra. She is quickly becoming known for her solo performances with the group and is featured regularly on the orchestra's Toronto concert series and tours including recent performances in Canada, the U.S.A., Europe and Asia. She is also featured on the orchestra's latest Juno-nominated recording of Vivaldi's L'Estro Armonico. Julia is a member of the innovative young baroque ensemble, I FURIOSI, and recently produced their debut CD for the Dorian label, Crazy, which will be released in September 2008. She loves to perform with her string quartets - the Eybler Quartet, period performance specialists who perform rarely heard classical works and the dynamic Kirby String Quartet, who play everything from Purcell to John Zorn. As a freelance violinist in Toronto, Julia performed with the Canadian Opera Company, the National Ballet Company, Via Salzburg Chamber Orchestra, Toronto Consort and Aradia Baroque Ensemble, with whom she recorded over 15 CDs for Naxos. In the summertime she loves to travel and in 2008 she has performances at the Galway Early Music Festival (Ireland), Festival of the Sound in Parry Sound, the Ottawa Chamber Music Festival, the Lameque International Festival of Baroque Music (New Brunswick) and the Klang und Raum Festival (Germany).

After completing a Bachelor of Music degree at Boston University School for the Arts, Margaret Gay accepted an invitation to the Banff Centre for Fine Arts, where she completed the winter programme. From there she moved to Toronto, where she earned a Masterâs degree at the University of Toronto and began a remarkably active freelance career performing on both modern and period âcello. Margaret performs regularly with Tafelmusik Baroque Orchestra, the Toronto Symphony, Opera Atelier, Mississauga Sinfonia, Baroque Music Beside The Grange, the Baroque Players of Hamilton, and Ensemble Polaris, a group exploring the traditional music of various Nordic countries. She is Artistic Director of The Gallery Players of Niagara, an organization based in the Niagara Region that presents chamber music. She was for many years a member of Modern Quartet, a string quartet dedicated to the performance of new works, the Burdocks, a foursome specializing in works of the 20th century, and Critical Band. In the summers she has performed at the Stratford, Elora, Parry Sound, Grand River Baroque, and Lameque Baroque Music festivals. She is currently a member of the Carmel Bach Festival Orchestra. Margaret can be heard on numerous CDâs, including a recent release from Ensemble Polaris, Not Much Is Worse Than A Troll, a Hungaroton disc of 17th century English theatre music, Ah! How Sweet It Is To Love, O Bali, from New Music Concerts, and, A Curious Collection for the Common Flute.

Patrick Jordan, a native of West Texas, studied with Susan Schoenfeld before moving to Boston in 1981 to study with Walter Trampler. Patrick holds a Bachelor's degree from the New England Conservatory and an Artist's Diploma in Chamber Music from the Longy School, where he began several years' study with Eugene Lehner. Now a resident of Toronto, Mr. Jordan is a member of Tafelmusik Baroque Orchestra with which he tours throughout Canada, the United States, Mexico, Asia and Europe. He is also the Artistic Administrator and violist with the Gallery Players of Niagara, and Principal Violist of the Carmel Bach Festival. He has been a member of the Boston Early Music Festival Orchestra since 1997 and has appeared with the New York Collegium as well as the American Classical Soloists. While living in Boston, he performed regularly with D.C. Hall's Band (a recreation of a 19th-century dance and concert band), the van Swieten Quartet, a period instrument string quartet, and the Handel & Haydn Society Orchestra. He was a member of the Boston Quartet, a modern instrument string quartet, and the Really Eclectic String Quartet (RESQ), a group that explored popular dance and lyrical music from many cultures. From 1988 to 1993 he was Lecturer in Violin and Viola at the College of the Holy Cross in Worcester, MA; from 2002-2005 he was on the faculty of the Royal Conservatory of Music in Toronto. He has recorded for Sony, Sony Classical, Dorian, Newport Classic, NorthStar, Analekta and Northeastern.

To hear the Eybler Quartet go to:
http://www.eyblerquartet.com/recordings.htm