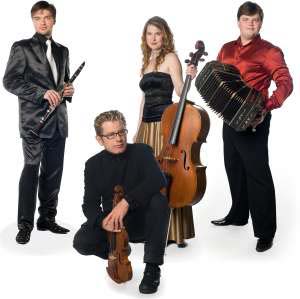 Quartetto Gelato
Saturday, December 20, 2014,
Wolf Performance Hall, 8 P.M.
Quartetto Gelato, Music with grace and humour
Peter DeSotto, violin, tenor, Peter has appeared in leading roles in numerous opera and theatre productions and was a member of The Toronto Symphony Orchestra for 11 years, and was voted Musician Of The Year in 1999 by the Toronto Musicians Association.
Alexander Sevastian, accordion, piano, bandoneon) has won four International Accordion Competitions.
Elizabeth McLellan, cello, is currently enjoying maternity leave. We are pleased to have cellist Lydia Munchinsky, a graduate of The Glenn Gould School of The Royal Conservatory of Music in Toronto join the quartet this evening. Lydia Munchinsky (nee Helsdon) grew up near Aylmer Ontario and began piano lessons at the age of four. She began studying cello when she was ten, and at the ages of ten and twelve performed for Dr. Suzuki at the International Suzuki Conventions in Australia and Korea. Lydia currently lives and works as a freelance musician and teacher in Toronto.
Colin Maier oboe, clarinet, english horn, violin, 5-string banjo, acoustic/electric bass, piano, saxophone, flute, guitar, mandolin, musical saw. He is also a dancer, actor, stuntman, singer, choreographer, acrobat and martial-artist. He has played with orchestras and acted on stage in many productions including the Vancouver Olympics.
With a performance repertoire that spans the globe including classical masterworks, operatic arias, the sizzling energy of tangos, gypsy and folk songs, the groupâs theatrical stage presence and relaxed humor establishes an intimate rapport with audiences worldwide.

Tickets are now on sale for the January 10, 2015 "The London Connection" concert.

For a list of London Holiday musical events see RenÃ©e Silberman's article in the December issue of the London Yodeller.