MUSIC IS BACK IN LONDON AND ELSEWHERE

It is heartening to see that many local and regional musical groups are giving or planning concerts. Most of them have limited room for a live audiences, but simultaneous online streaming allows everyone to watch.
Please look at our Special News column for information on London area concerts.
Over the past year we have been meeting with the members of the Ontario Classical Music Association. Until recently we have all been reluctant to plan for concerts with a live audience. A few (Orillia, Sarnia, Newmarket, Cornwall) have announced beginning programming in February or March of 2022.
One of the sad moments was the announcement by the Welland-Port Colborne Concert Association that they will suspend plans for the time being. They have been producing concerts since 1947.

We all face the fact of an aging audience but hope that the prospect of live music will bring them and others back with enthusiasm. 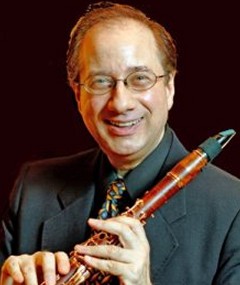 Charles Neidich
Clarinetist
Charles Neidich (U.S.A.) Hailed by the New Yorker as "a master of his instrument and beyond a clarinetistâ, Charles Neidich has been described as one of the most mesmerizing musicians performing before the public today. He regularly appears as a soloist and as collaborator in chamber music programs with leading ensembles including the Saint Louis Symphony, Minneapolis Symphony, Orpheus Chamber Orchestra, I Musici di Montreal, Tafelmusik, Handel/Haydn Society, Royal Philharmonic, Deutsches Philharmonic, MDR Symphony, Yomiuri Symphony, National Symphony of Taiwan, and the Juilliard, Guarneri, Brentano, American, Mendelssohn, Carmina, Colorado, and Cavani String Quartets.

Mr. Neidich has performed throughout Europe, Asia, and the United States, and is a sought after participant at many summer festivals such as the Marlboro and Sarasota festivals in the USA, the Orford and Domaines Forget festivals in Canada, BBC Proms in England, Festival Consonances and Pontivy in France, Corsi Internazionali di Perfezionamento in Italy, Kuhmo, Crusell Week, Turku, and Korsholm festivals in Finland, the Apeldoorn Festival in Holland, Music from Moritzburg in Germany, the Kirishima and Lilia summer festivals in Japan, and the Beijing Festival in China.

When Charles Neidich began studying clarinet with his father, Irving Neidich at the age of 7, he had already started piano lessons with his mother, Litsa Gania Neidich. He continued studying both instruments, but the clarinet gradually won out, and he went at the age of 17 to continue studying with the noted clarinet teacher, Leon Russianoff. After 4 years at Yale University where he majored in Anthropology, Charles Neidich went to the Moscow State Conservatory as the first recipient of a Fulbright grant to study in the Soviet Union. He studied in Moscow for 3 years as a student of the clarinetist, Boris Dikov, and the pianist, Kirill Vinogradov.

Known as a leading exponent of period instrument performance practice (he is the founder of the noted period instrument wind ensemble, âMozzafiatoâ.) Charles Neidich was one of the first soloists to improvise cadenzas and ornament classical concertos. He has performed his restoration of the Mozart Concerto throughout the world both on modern and period instruments. Mr. Neidich has been influential in restoring original versions of works and bringing them before the public. A list of the clarinet classics he has restored to their original form includes works as diverse as the previously mentioned Mozart Concerto, Concerti of Weber and Copland, the Soireest cke of Robert Schumann and the Andante and Allegro of Ernest Chausson.

Mr. Neidich is also an ardent exponent of new music and has premiered works by Milton Babbitt, Elliott Carter, Edison Denisov, Helmut Lachenmann, William Schuman, Ralph Shapey, Joan Tower, Katia Tchemberdji, Vasilii Lobanov and others. He has championed John Corigliano's Concerto, performing it throughout the United States notably with the Syracuse and Jacksonville Symphonies in performances many have called definitive.

His recordings are available on the Sony Classical, Sony Vivarte, Deutsche Grammophon, Musicmasters, Hyperion, and Bridge labels. For Aaron Copland's centennial, he released the world premiere recording of his reconstruction of the original version of Copland's Clarinet Concerto with âI Musici di Montrealâ for the Chandos label. Mr. Neidich has turned his attention in a serious way to conducting, and has appeared with the Avanti chamber Orchestra, Tapiola Sinfonietta, Helsinki, at the B'stad Festivalin Sweden, the Kirishima Festival in Japan, with the New World and the San Diego Symphonies (in a triple role of conductor, soloist, and composer), and in Bulgaria with the Plovdiv State Philharmonic.

Very active in education, Charles Neidich is on the faculties of the Juilliard School, Queens College of the City University of New York, the Manhattan School, and the Mannes College of Music, and has held visiting positions at the Sibelius Academy in Finland, the Yale School of Music, and Michigan State University. He is in demand for master classes around the world and for innovative lecture concerts he has devised such as "Old is New: how playing old music on period instruments is like playing new music on modern instruments," and "Craft and Drama: how understanding how Brahms composed makes for a more compelling performance."

With his wife, Ayako Oshima, he has published a book on the basics of clarinet technique for the Japanese publisher, TOA Ongaku inc. Last Spring, Charles Neidich was the recipient of the William Schuman Award given by the Juilliard School for outstanding performance and scholarship.